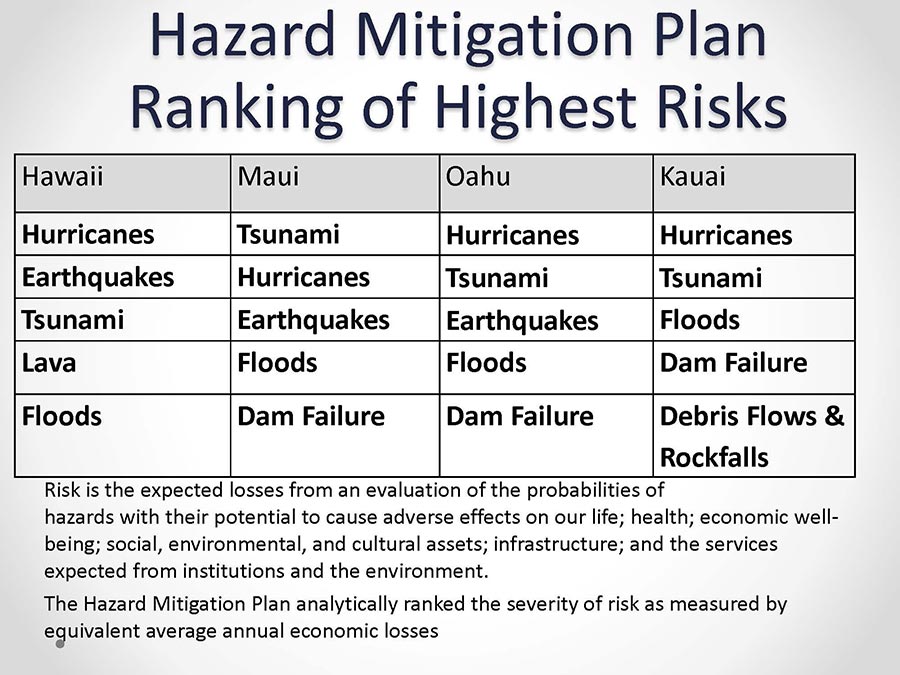 The development of state and local hazard mitigation plans is critical for maintaining eligibility for future Federal Emergency Management Agency (FEMA) mitigation and disaster recovery funding. In accordance with 44 CFR201.4, all states are required to prepare and submit to FEMA a Standard State Mitigation Plan as a condition for receiving non-emergency Stafford Act assistance and FEMA mitigation grants. Review and plan updates had to occur every three years from date of plan approval of the previous plan. The 2013 project identified issue areas and gaps in the Hawaii State Plan that needed additional attention. This project accomplished the required update of the SMHMP and secured FEMA approval no later than October 3, 2013.

The plan incorporated a Structural Risk and Vulnerability Assessment of State of Hawaii Critical Facilities, which provided an improved risk-based assessment of public buildings considering both seismic and hurricane hazards. This was an in-depth analysis of critical State of Hawaii facilities and the Department of Education buildings that serve as disaster shelter facilities in the State of Hawaii. This should result in a major improvement in risk management of public safety and emergency preparedness for an island state where mass evacuation away from the hurricane coastline to inland jurisdictions is not an option.